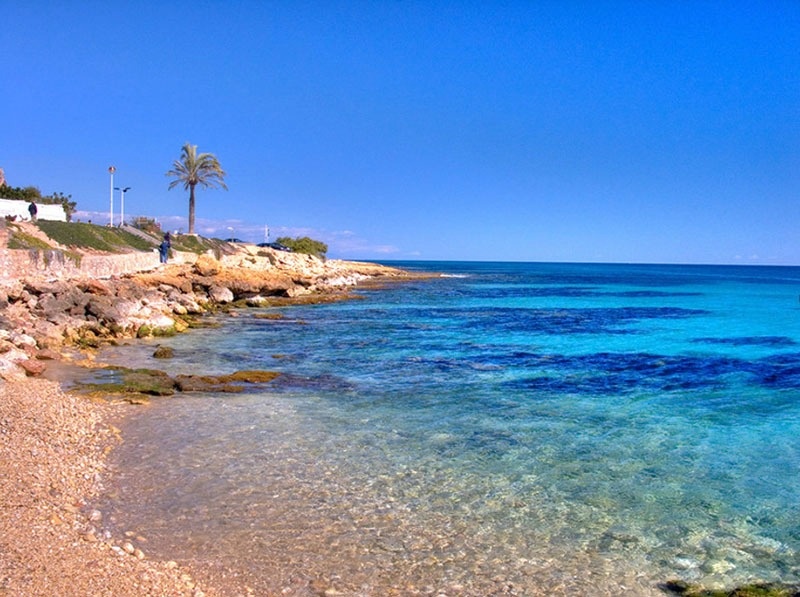 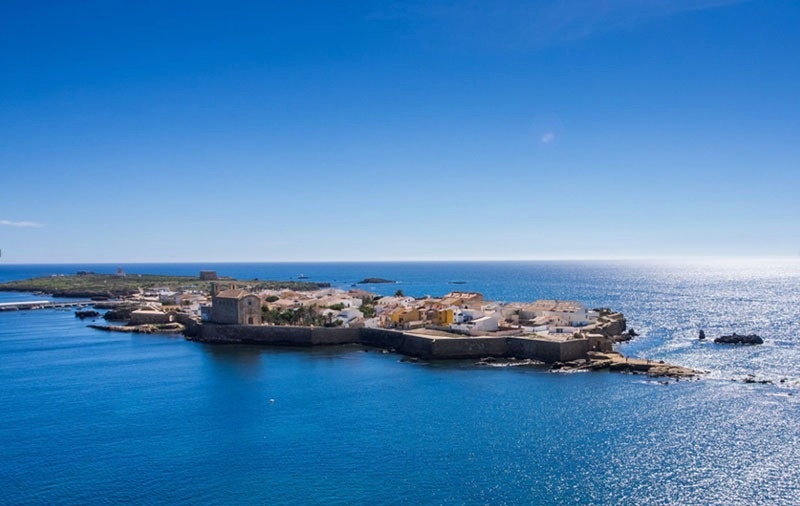 Tabarca is the only inhabited island in the Valencian Community. Santa Pola is the closest point from which it can be accessed from the peninsula. Dare to get on one of the taxi boats (commonly called “tabarqueras”) and you will discover the crystal clear waters of this quiet island. You can find more information about prices and how to get here .
Tabarca was an old pirate refuge. To end piracy, it was fortified and populated by inhabitants of the Tunisian island of Tabarqah (where its current name comes from).
In 1964 it was declared a National Historic Site. On the island, in addition to restaurants and places of leisure and entertainment, you can visit the Nueva Tabarca Museum.
The waters surrounding the island are the natural habitat of hundreds of different marine species. So much so that in 1968 it was recognized as the first marine reserve in the country.
3. The Castle-Fortress 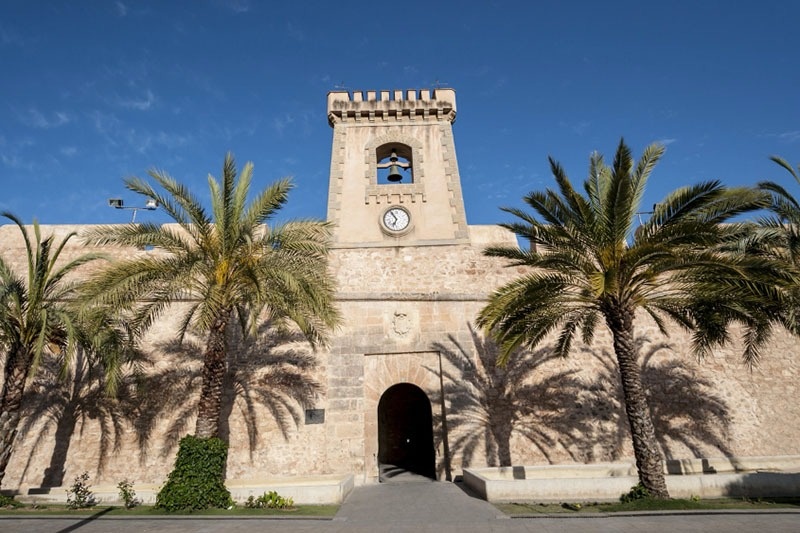 This military architectural sample from the 16th century houses the Museum of the Sea, the Municipal Exhibition Hall, the Assembly Hall "Baluarte del Duque de Arcos" and the Chapel of the Virgin of Loreto. It is located in the heart of the city, surrounded by a multitude of bars, restaurants and shops.
Since 1859 it has been owned by the Santa Pola City Council and has been used to perform various functions. It has been the headquarters of the Town Hall, Civil Guard Barracks, Justice of the Peace, hospital and even an improvised bullring.
4. Las Salinas

These beautiful wetlands that cover 2,470 hectares are located in the coastal area of Santa Pola Bay. This declared Natural Park is the natural habitat of flamingos and storks thanks to the salt exploitation since the end of the 19th century, having become one of the best destinations in Europe to enjoy Birdwatching.
It is included in the RAMSAR list and declared by a European directive Area of Special Importance for birds due to their constant presence in the area. The birds feed on the fish and invertebrates that penetrate the salt flats, creating a characteristic landscape of flora and fauna in the area.
Its operation to extract salt consists of the circular flow of seawater through a circuit of ponds. Stagnant water in shallow ponds evaporates by the action of the sun and it is possible to extract sea salt. Take a bike ride or hike to enjoy nature in its purest form.
The Salt Museum is undoubtedly one of the must-sees on an itinerary through Las Salinas. The Salt Museum is located in the facilities of an old salt factory, within the Natural Park. In it we can discover the salt extraction process and its history, as well as information about the Natural Park, from where you can take an itinerary to observe flamingos, gray teal, white jars, little egrets, yellow-legged gulls, stilts ...
5. The Santa Pola Lighthouse Viewpoint 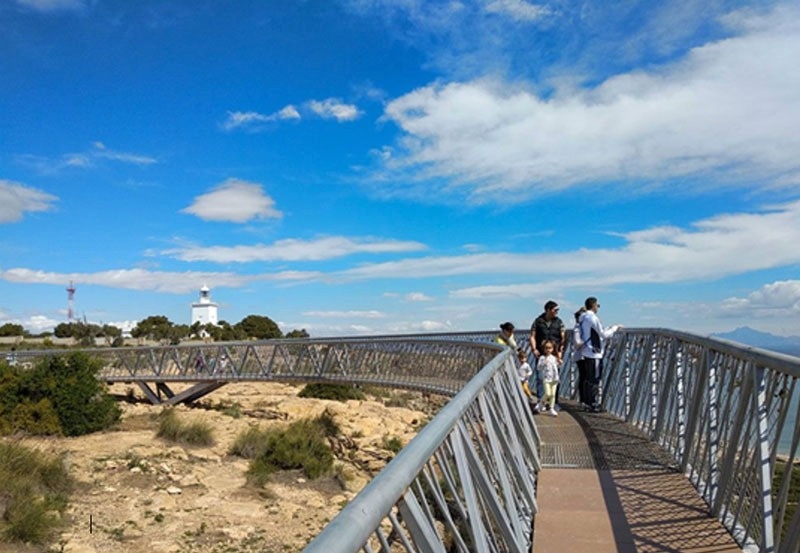 The viewpoint of the Santa Pola lighthouse is one of the most beautiful corners of the province of Alicante to take a good walk, disconnect with the waves of the sea as a witness, or simply watch a sunrise or sunset, a corner with magic and some Spectacular views very close to the city of Santa Pola (Alicante).
From this point you can see incredible views of the island of Tabarca on clear days, as well as views of the Arenales del Sol and the bay of Alicante, among other points, a place where normally, although it is perfect for the beautiful views that it offers, it is usually windy except on good or hot days, so something warm is recommended just in case.
This beautiful place has a walkway that allows you to enjoy a unique panoramic view, where comfortable shoes are recommended because the access path to the walkway and the entire area, from where you park your car - even the access to the parking -, is more for walkers , being able to walk with the dog or the children of the house - you just have to be careful with the dogs and children on the "cliff" of the lighthouse because there are no protections.
Next to the viewpoint of the footbridge is the lighthouse, the place where the Torre de la Atalayola was located, one of the coastal watchtowers that were built since 1552 on the Alicante coast - currently, as we have already said, and since 1858 , the current Santa Pola lighthouse, the highest point of Cape Santa Pola, which enjoys great visibility, was erected on this corner. It is located at the eastern end of Cape Santa Pola on an old watchtower of the s .XVI. It was installed in 1958 to guide ships at night. Its focus, located 152 meters above sea level, is capable of guiding ships up to a range of 16 miles.
Its strategic position allows you to contemplate spectacular views of the bay of Santa Pola, Alicante and the Island of Tabarca. On clearer days it is even possible to see the south of Cabo Cervera and Isla Grosa and Peñón de Ifach to the east.
6. Museums
A visit to the museums of Santa Pola will bring you closer to the history, culture and seafaring tradition of the town.
The Museum of the Sea is located in the Castle-Fortress of Santa Pola. It has three different sections, History and Archeology; Ethnography of the Sea and Fishing; Ethnography of Music and the Sea.
The Salt Museum is located in the facilities of an old salt factory, within the Natural Park. In it we can discover the salt extraction process and its history, as well as information about the Natural Park, from where you can take an itinerary to observe flamingos, gray teal, white jars, little egrets, yellow-legged gulls, stilts ...
The Esteban González Ship Museum is a museum-ship in which the authentic and genuine life on board of the fishermen of Santa Pola is recreated. It is located in the vicinity of the City Hall, in the Plaza Constitución. The boat shows the most relevant fishing gear in the municipality, which is trawling. You can also see what life on board and life on land was like, as well as its importance for the economic and social development of the municipality.
The Santa Pola Aquarium is the oldest in the Valencian Community and has 9 large aquariums. Its facilities are dedicated to showing part of the fauna and flora of the Mediterranean Sea, thus being an important educational and leisure instrument that makes our closest maritime environment known (the bay of Santa Pola and the island of Tabarca). The water is collected directly from the sea, and after treatment it is driven to the aquariums.
Roman House of the Palm Grove. The Roman port, called by ancient geographers Portus Illicitanus (4th century AD), became a real city whose commercial activity is demonstrated by the archaeological remains found: warehouses, a salting factory where the “garum” sauce was made, a necropolis and a luxurious Roman villa built in the 4th century AD. C. with polychrome mosaics of geometric style. The “Casa Romana del Palmeral” is a luxurious Roman villa of a stately character built in the 4th century AD. It has a large peristyle patio surrounded by a wide corridor that gives access to seven rooms -triclinium (dining room), oecus (living room ) and cubicula (rooms) - decorated with geometric polychrome mosaics and wall paintings.